Thank you to all the lovely people who have adopted one (or maybe two!) of our dogs and given them the lives they deserve ........ Thank You !! 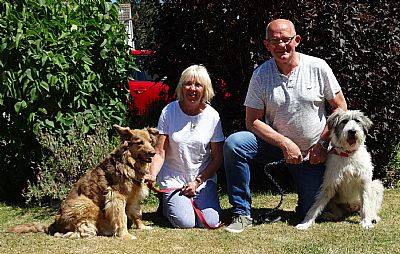 lovely playful comedienne Kizzie (right of photo) is now happily adopted and living with a pal, Cassie on the West Coast of Scotland - from being found wandering on the streets in Romania to being adored by all family - what more could we wish for her

Both these dear dogs were from the Valcea public shelter and  through a number of different circumstances they were brought  back together here in the UK - it was never the plan !! After a bumpy start they are now the best of friends and enjoy their time exploring the Yorkshire countryside thanks to Zoe & Craig.

This tiny boy and his sister were living rough with a pack of larger stray dogs in a roadside field - the road claimed the life of his sister but Dinky was fortunately saved.  A more loving, intelligent and charming dog would be hard to find and he is now totally adored by Abi and family, and very happy living near the seaside in North Yorkshire with three other doggy friends

Dear little Rossi was in the same location as Rikki and they had both lived together on chains.  Initially it was only Rikki who was planned to come but then we heard about Rossi - and how could we leave him behind - he is now happy and settled and living in a home for the first time in his life - thank you Claire

The power of Facebook proved to be Jake's ticket out of Romania - we shared the photo of him on the left and basically said "anyone ??" and the reply came straight back from the Nelson family "yes us !!" .......  after being child & cat tested this little dog who never stopped wagging his tail left with his new family and is having the best time ever !

Difficut to comprehend now when we see him warm, cosy & happy that in Romania Rikki spent his life living on a chain.

He found himself a fabulous home with Mike & Sue and is now living a life of luxury and we are thrilled for him !!! 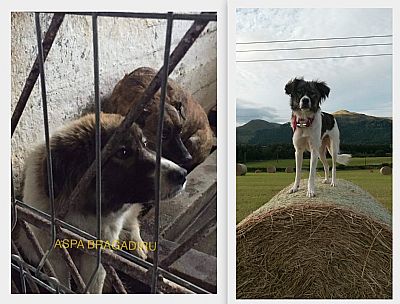 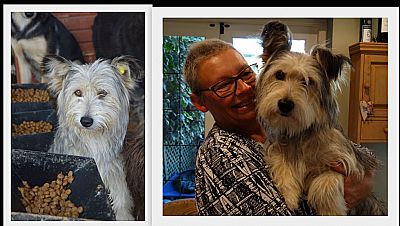 Bubbly has been our longest foster so far this year - he waited patiently for 15 weeks until Brenda came along and adopted him - he is now an Essex boy and we wish him and Brenda years of happiness together.

What a lucky little chap he is xx 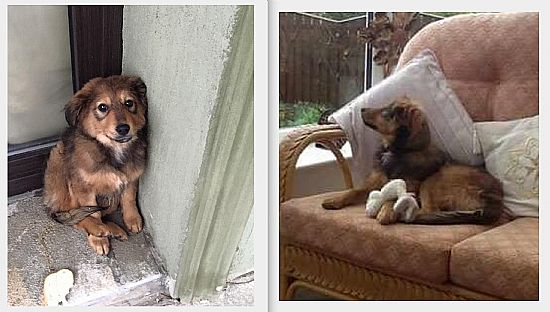 "H" now Harry is settled and happy in his forever home in which is a long way from when he was an abandoned puppy on the streets of Romania - he likes to sit on the sofa in the conservatory and watch the birds - he also likes playing with his Rough Collie pals.

Bijoux now Tilly is settled in Wales with her new family - she has coped well with the separation from her brother Woody and is making new friends - and now goes on her new owner's boat wearing her own life jacket ! 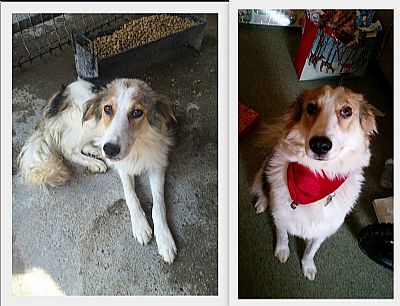 The image of Ted on the left was the first time we saw him, and there was no way we could ignore those eyes.  Although he arrived thin and a little subdued Ted (then named Romeo) flourished, and he was great fun for his foster mum Colleen.  We were delighted when his new mum Claire contacted us to say that Ted was the dog for her and her new little family, and so shortly after he joined her in the beautiful Scottish countryside.  We love to see photos of him enjoying life to the full with so much space and freedom and a million miles from this public shelter in Romania. He is pictured right enjoying his first Christmas in the UK.

Benny was found alone wandering by the side of a river, it is not known where he came from or if he had any siblings but he was probably dumped there and just left to fend for himself - lucky for him he was found.  He came to Colleen as a foster but very very quickly she knew that Benny would not be going far.  He was only a puppy of approx. 6 months and thankfully has not known any harsh treatment or the horrors of the public shelters - he is a happy, healthy confident little chap and you can't help but fall for that face ! There are many many little dogs like him .......just waiting for their luck to change. 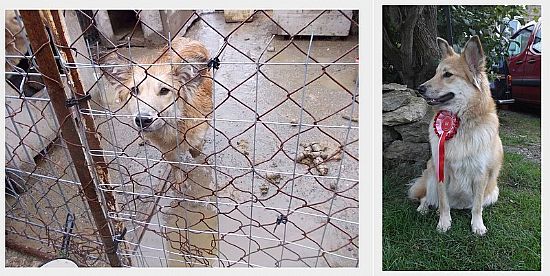 Ginger was the first Romanian dog to come to Liz, almost by chance.  Her one-time kennelmate (Hope, of the Saving Hope Group) had a home offer, but the lady who was enquiring about Ginger pulled out and she was left facing an uncertain future. She came from Petrosani via Bucharest to Yorkshire, and has made a great ambassador for the country's dogs - attractive, intelligent and a big personality. She enjoys public appearances and loves to work her charm on new friends, and if it wasn't for her, the others may never have happened - so we owe her a thank you !

Pretty little fox lookalike Indie came from Valcea where she and her litter of puppies had been abandoned. Sadly all her babies died one by one and she was left alone and very depressed.  She came to Liz as foster and within a very short time this sad and skinny little dog was a sleek and shiny tail wagger ! With her sweet personality and good looks it was not long before she was offered a lovely home by Abby, daughter of a good friend, and off she went to be loved and pampered for ever more - just what she deserves after all she has been through.

Now renamed Skye, and very happy with Susan and her friend Scooter (also from Valcea), Rosie was in very sorry shape when first pulled from the grim public shelter, and at one point was suffering from liver failutre so severe that is looked as if she might not make it. We stuck with her, and in due course a thin, bedraggled and very needy pup arrived as foster with Liz.  Her return to health and high spirits was miraculous, and as her fur grew back and her body condition improved, she became a playful and loving dog who has since won many hearts - and recently a trophy for obedience training too, what a good and clever girl she is. 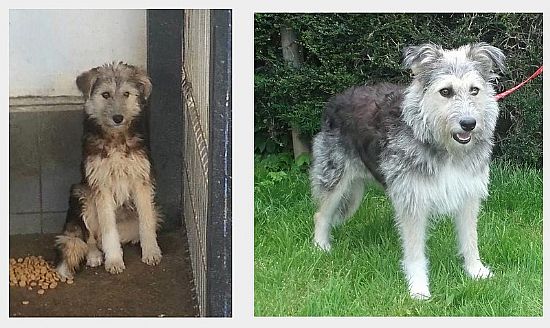 Tasha was Liz's first foster dog from the Valcea shelter, and its perhaps true to say that if she hadn't already been promised to good friends Jack and Barbara, this cute whiskery pup might have ended up staying ! Only a baby when she first arrived, Tasha surprised us all with how much she grew, and has since made a stunningly attractive adult with a strong, sometimes naughty character which only serves to endear her more to her dad Jack. She has the trick of 'smiling' when attempting to ingratiate herself and we really should try to capture that grin, with all fangs on display !!  Its quite a sight ..... 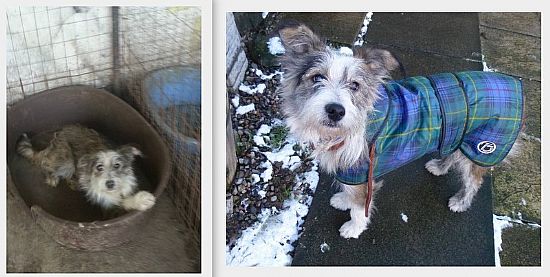 Dainty little Alice arrived from Valcea in the autumn 2014 to be fostered with Liz.  Tougher than she looks, she had survived distemper as a baby puppy, but had some residual damage - one cloudy, probably vision-impaired eye, and the typical nervous twitch which is often a legacy of this disease.  Despite this, she was very much a survivor, but her lack of trust in humans at first held her back.  As she grew in confidence, she learned to enjoy cuddles and earning a treat with little tricks like sitting, offering a paw and rolling over for tummy tickles.  Eventually she was offered a home in Scotland, where she now shares Denise with a bunch of Bearded Collies and a few other Romanians.  She continues to blossom and we love getting reports from this very special young lady

Who could resist this sturdy black and tan cutie with the huge eyes and loving nature ? Certainly not the ladies who cared for her in Valcea, or Liz who invited her to come as a foster dog, or Yvonne who quickly offered her a forever home in Scotland to this big dog in a very small package. She has been a great success in her new home, and won many hearts - another who is a great ambassador for the Romanian dogs - cuddly, affectionate and full of personality.

Three year old shaggy sheepdog lady from Botosani PS, fostered with Liz and found her lovely new family just a few miles down the road......  Many thanks to Roy and Angelika, she could not be loved more!

Stunningly beautiful retriever type, another from Botosani Public Shelter, Rowan arrived skinny, dull-coated and limping from old damage to a hind foot.  With a few weeks of TLC in foster with Liz her true beauty was revealed and she never stopped wagging her tail, what a sweetheart she is despite all she has gone through.  Adopted summer 2015 and now very happy with Diana and her new border collie friend Rufus in Cumbria

Hettie came from the Valcea public shelter.  Originally it was thought that Hettie was a male and it was not until she was taken from the shelter that the rescuers realised she was in fact a girl.  She arrived very subdued and quite fragile after her long journey. However, she quickly adapted, as they all do, to living in a home.  She was only supposed to be a foster for Colleen and Graham, but they soon realised that Hettie was going nowhere, and she is now the resident gentle giant, and became Rommie No 2 for their home. 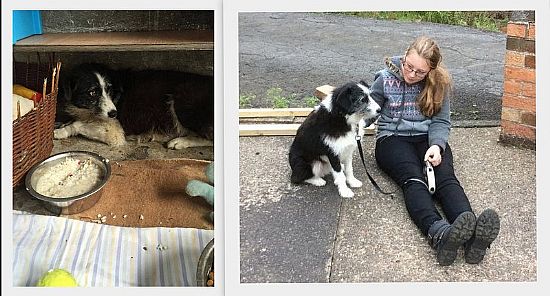 Dear little Cleo arrived very frightened and anxious.  She had lived in a forest close to Valcea, Romania.  She was caught and neutered and instead of returning her to the forest, as many dogs have to be (as there are no homes for them to go to) her rescuers asked us for help.  Fostered by Colleen, Cleo slowly came out of her shell and adapted to living in a home.  After several weeks she was adopted by Vicky, Gary & Sophie and joined another Rags to Riches dog, Misty, adopted earlier in the year. Cleo continues to do well, we are all very proud of her. 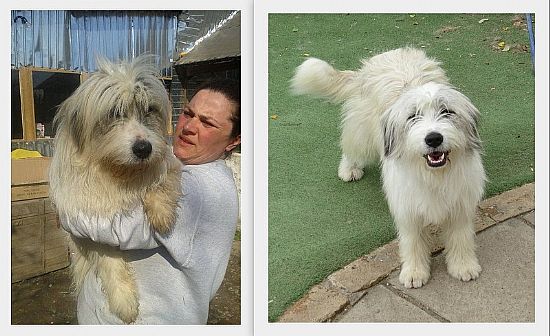 Pretty two-year-old Mia had only 24 hours left to live in March 2015 when her rescuer Cristina pulled her from the shelter, which was about to be closed and all the dogs destroyed.  Her photograph circled Facebook, and many admired her, until her big chance finally came via Rags 2 Riches.  She came to Liz as foster, and has decided she wishes to stay! Visitors who admire her are treated with the greatest disdain - and Mia got her way and joined the bunch of "failed fosters" at her new home, fitting in very well with the resident Bearded Collies and Rommie dogs, in the niche of her own creation.  A strong-willed little madam with heaps of charm!

Lexi came from the streets of Timisoara where she was found abandoned as a small puppy.  Her rescuers placed her into a paid foster where she eventually outgrew her welcome, and threats were made to turn her back onto the streets.  She was luckily invited to come as foster to Liz, where she spent a very happy couple of months until she was finally adopted by the lovely Ann and her son Patrick, former Beardie owners looking to "downsize".  In her new home she has continued to blossom, proving very intelligent and trainable, and is very much loved, a delightful little mini-beardie!